You might have already seen pieces from the beautifully rendered “Moondust” series that’s been spreading like wildfire across the social media sphere for the past two weeks or you might have come across other works from the artist such as her magnetic graphite sketch of British-Nigerian soul singer Sade. We recently sat down with Toronto-based artist, Sara Golish to discuss the inspiration behind “Moondust” and future plans for her “ode to Afrofuturism”. Enjoy!

How long have you been working on the “Moondust” series for?
I started the series back in the spring/summer of 2013 but had been pondering the concepts for at least a few years. Some things just take time to evolve right?

There certainly is an “Afrofuturistic” feel to the series. How did you go about researching the look and feel of the series?
Yes, for sure. One of the main inspiration elements was from the Afrofuturism movement, which I have been long drawn to. My research varies a lot. Sometimes I’ll sit down for hours and look up images, ideas, concepts and become lost in my quest. While other times it may only happen briefly or when I’m not looking, I’ll come across a hairstyle or cool piece of jewelry that ignites an idea.

The faces come more from your imagination instead of being based on a real person. This is quite a departure from your normal work in the sense. Why the change in approach?
Yep, they are all completely made up. You could definitely say it’s a departure from my paintings but it’s not a departure but rather an extension of my sketching style. That was the idea behind the series. I wanted to appropriate my little ink sketches and fuse it with my rendering style of my portrait drawings. To create a larger, evolved version of my notebook sketches.

The portraits seem perfectly symmetrical at first glance but upon further inspection you have introduced elements that slightly tip the scale asymetrically. Was this intentional?
Yes! I love asymmetry, but with that an understanding of balance is needed so the composition isn’t thrown off. That was always taken into consideration with these pieces particularly because of the straight on, centered placement of the girls. 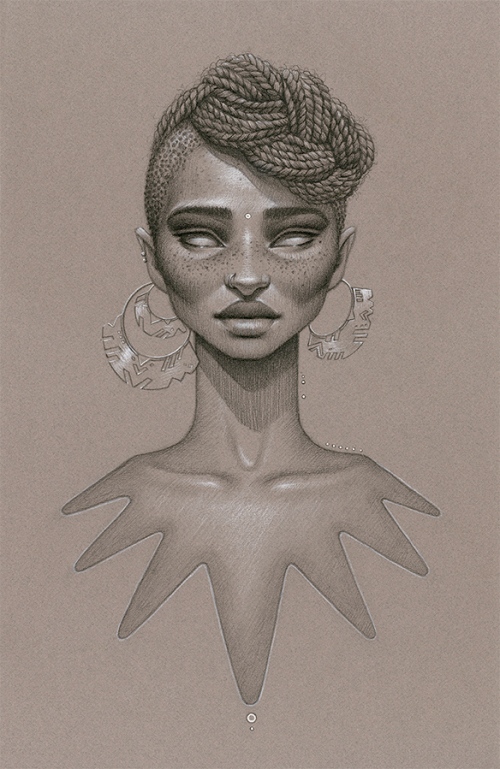 The series has been well received not just in the online art community but even trickling down to fashion, style and hair blogs. How do you feel about the role of social media for an artist today?
WONDERFUL! I’ve been contemplating the concept and role social media plays in the lives of artists a lot these days. It’s absolutely incredible and I am so grateful for it. I know if it wasn’t for social media my work wouldn’t have spread as easily and as fast as it has. Of course it does have it’s downfalls in that people also seem to have no problem taking from other artist’s ideas because they are also so easily accessible or that because of the access everyone is trying to get recognition in a sea of artists worldwide. But at the end of the day, I thank social media for it’s power to leverage my art career. 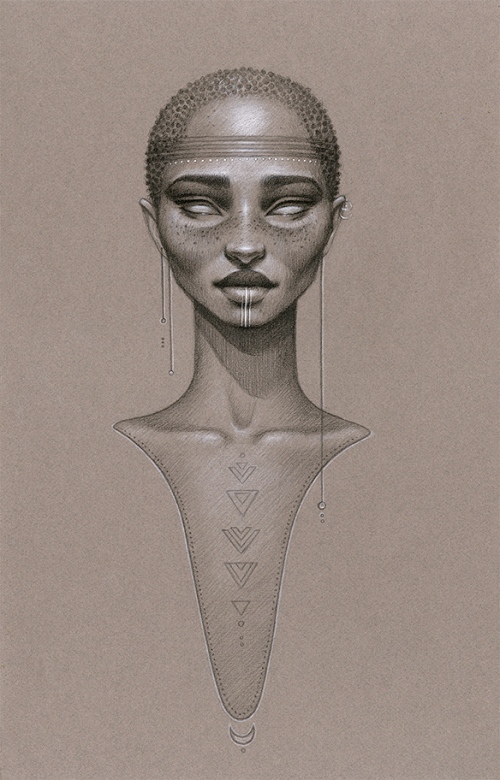 Do you have any plans to show these works together in the future or do something else with the “Moondust” series?
I’m not planning on showing them together because they are selling. I’m doing limited edition giclée prints which I will be announcing shortly the details. I am planning on expanding on the series however. I still have many many ideas for them that are still only sketches and notes in my notebook.

Thanks for your time Sara!
To check out more work from Sara Golish, visit her website or check out her instagram